FARM Champions is a roleplaying game where you (the players) play young heroes forced by choice or circumstance into embarking on a quest, going on adventures, and taking odd jobs (all developed by the Narrator) to protect and improve your community.

Young Heroes. You will play folks who grew up in a settlement together, usually a village, and who come together by choice or circumstance to deal with a threat to your community. Though your characters can be of any age, they are not experienced soldiers, merchants, or adventurers. A life of action and improving your community is new to them.

Jobs, Adventures, and Quests. The threats that face your community can be simple or complex, and may include anything from bad weather, catastrophic natural events like earthquakes or volcanoes, roving bandits or monsters, difficult negotiations over trade routes, or an organized faction of evil creatures. Quests might be epic in nature like destroying a powerful artifact, adventures might involve improving trade relations with a nearby settlement, and jobs might be slice-of-life tasks in which gather ingredients in order to win the local fair’s pie baking contest.

Your Community. The settlement your characters grew up in is their home, and is their bond to each other, to a number of recurring non-player characters such as patrons and family members, and thus is an integral part of character creation, quests, and the advancement of an adventure or campaign. Building the community and its many folk is just as important as creating the heroes themselves, and this is taken into account throughout the game mechanics.

FARM Champions is a cozy fantasy TRPG in which you play regular people going on slice-of-life adventures that affect your community.

Think Dragon Quest, Spice & Wolf, Ryuutama---settings where hearth and home are important, the average person is friendly, and good food and respite are usually just a bend in the road away.

The game is fun, quirky, easy to read, and all ages friendly, and it's got some nice mechanical crunch to it.

The PDF is 78 pages, with a very user-friendly layout and clean, well-organized text. There *are* some illustrations, but there aren't a ton, and while the individual quality is really high, the limited quantity makes the middle of the book feel a little bare.

Dice rolls are relatively simple. You throw 2d6 + Skill + Gear, a double one fails, and anything is is compared against a TN. On an average difficulty with no Skill and no Gear, you succeed 50% of the time---although the GM can add further penalties if they wish.

Combat is a bit crunchier, but if you're familiar with d20, this feels very similar. Everything has been boiled down and simplified, but there's still initiative, you're still taking a move and an action per turn, and you're still dropping monsters' Hit Points to win the fight.

Your current Wellness also affects how easy it is to heal Hit Points, so characters functionally have two layers of HP: one short-term and one long-term.

For characters that have it, magic is fun and uncomplicated. There's a built-in spell list that provides some neat essentials, but there's also rules for improvising magic , which allow you to riff off of your existing spells and create variations that you can permanently add to your spellbook. It does require GM approval, but it feels like the right mix of flexibility and pre-made content.

Character creation is easy, but also peppered with meaningful decisions. Furthermore, you don't just create and stat out your PCs. You stat their community and (absent) mentors as well, creating an in-universe home for your adventurers to keep going back to.

Communities also grow and evolve during play, and threats to them can impact their stats---giving the players a way to directly and numerically measure the effect that their heroism is having on the world. This means that a typical game begins and ends in the community, even if the middle took the players far across the land to deal with cosmic problems.

For GMs, there's tons of resources in FARM Champions---including a full bestiary---but the book devotes an equal amount of time teaching you how to build your own content, and this process is always quick and easy.

Overall, FARM Champions is a great little engine for running community-centric, pastoral fantasy without a ton of prep work, and without looking the feeling of chance and uncertainty you get from a twenty sided die. For folks who like cozy games, adventure, and creative input from the players, or for folks who want something to run for a group that's young or new to gaming, I would strongly recommend FARM Champions.

Thank you so much for the detailed review!

We have uploaded v2, featuring a landscape layout, a few more monsters, and a lot more art! 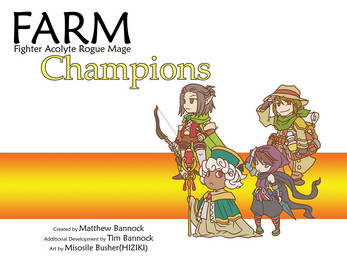 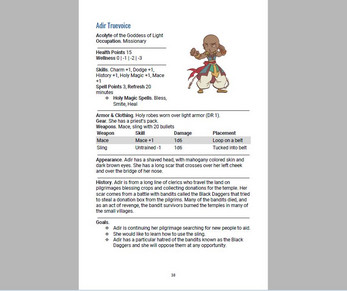 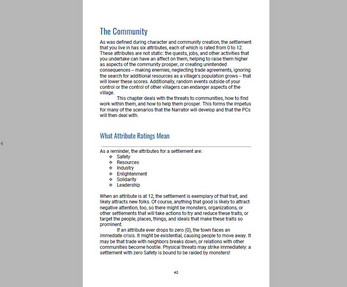 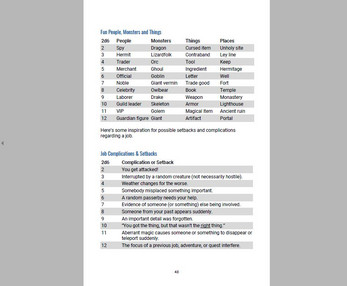 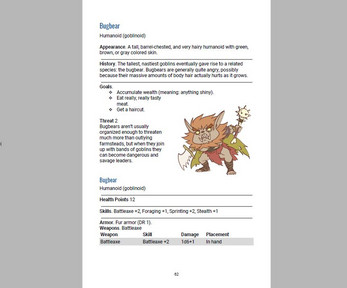