Create characters in a minute. Come up with a handful of encounters, scenarios, or plot twists in five minutes...or even on the fly! Run a full, satisfying game in just 1-2 hours...or longer! Within the compact nature of the game, the use of adjectives and nouns forces characters to change and grow as they deal with the scenarios they face, and therefore a short series of continuous sessions or even a long campaign are fully supported, and your characters will evolve!

DeScriptors: Definitive Edition expands upon the previously released "Anything Goes PWYW Version" by including not one but five fully detailed campaign settings, complete with scenario ideas, optional rules, advice, and pregenerated characters. This helps to show the true range that a narrative game like DeScriptors can provide! The Definitive Edition comes complete with an FAQ-style game master/storyteller guide: creator Matthew Bannock and Worldbuilder's Anvil podcast host Jeffery Ingram answer a series of questions regarding inspiration for narrative games, gettings players who are used to more "traditional" RPGs into the mindset of DeScriptors, balancing encounters with regard to trait-bidding, and their experiences running the game. Functional advice for an incredibly open-ended game!

Ethanol Pop: Wondrous Days. This steampunk fantasy slice-of-life game is filled with wondrous gizmos, genre-bending mashups, and scenarios that are equally at home in a pastoral fantasy or an airship pirate campaign!

Anything Goes: While You Were Gone. The setting featured in the PWYW "Anything Goes" edition of DeScriptors and inspired by the micro fiction story "While you were gone" reappears here for completeness' sake! This bizarre setting has been described as "RIFTS as played for laughs": portals to alternate dimensions have ravaged the world, but you can run funny, scary, or epic scenarios with equal ease.

Hunters Guild of the Ancient Lands. This fantasy campaign setting is perfect for monster hunter scenarios or a "gotta collect 'em all" monster training/fighting scenarios! The players build characters who are members of a guild that strikes out into a truly fantastic, utterly mysterious monster-filled world, hoping to catalogue them, tame them, fight them, or harvest them for trade. The vistas are truly remarkable, and certainly the product of some kind of great magic. What mysteries might be unearthed while searchng for incredible monsters throughout the Ancient Lands?

SUPERMAX! A superhero campaign in a "dystopian utopia" - superpunk, if you will! In this setting, superpowered folks beat back an alien invasion and helped unite the Earth's government, creating a utopia. Except, if you're a powered individual, you're either in prison -- SUPERMAX prison, of course! -- or you're one of the prison guards. "Utopia" indeed! Also, as it turns out, there's a conspiracy involving alien technology recovered from the invasion force...

The Philosopher's Stone. You are one of the brave few that stands against the madness-inducing interlopers from beyond the realms of reason, hoping to heal the wounds of reality-warping Cthulhu-esque monsters as they ravage the land. This setting works in a fantasy world, in 1920s New England, or in the modern world: the point is that the madness is palpable, and only you can help repair reality.

In order to download this game you must purchase it at or above the minimum price of $4.95 USD. You will get access to the following files:

I’m really enjoying what I’m reading. Coming from older editions of D&D to world of dungeon and now to diceless, I have a few questions:

* How are “descriptors” used in play? Do they define or constrain the kinds of adjectives or just serve as fictional anchors?

* Is there a notion of difficulty? Perhaps a certain challenge may require 3 adjectives to overcome?

* How do monster adjectives get spent or are they again intended as fictional cues?

* Do you have an example of combat to share?

Most of these answers can be found in the revised rules and example of play at DeScriptorsRPG.com. Let me know if any remain after that and I'm happy to help out. Thank you so much for your interest in DeScriptors!

I should add: the revised rules are simply heavily edited for clarification; they are not, in fact, new rules.

But I figure I might as well answer the questions directly here, just because I have a free moment right now ;-P

* How are “descriptors” used in play? Do they define or constrain the kinds of adjectives or just serve as fictional anchors?

Descriptors are just fictional anchors. You can have any adjectives you want (or pick up during play). The descriptors themselves are "triggered" by spending an adjective, but then using the descriptor in your description of succeeding at the challenge. So it can't be spent itself -- you have to have an adjective to spend to activate it -- but it allows you to always use your character's "core concept" to describe something, and therefore not have to rely on the adjective spent for your description. It's helpful if your adjectives (especially setbacks) just don't really apply to the challenge you want to succeed at.

* Is there a notion of difficulty? Perhaps a certain challenge may require 3 adjectives to overcome?

Tough challenges are a thing: they require 2 adjectives to succeed. Every combat/physical aggression-type challenge is effectively a tough challenge. You could of course have even more difficult ones that cost 3+ adjectives, but IMHO, that's better served by offering multiple challenges or even tough challenges to multiple characters in order to succeed, or having different "stages" of the challenge so you're presenting more interesting and varied fictional situations. Like a boss monster with multiple forms that require different ways of defeating them, or complex traps that need to be avoided, disabled, resisted, etc., and so on.

* How do monster adjectives get spent or are they again intended as fictional cues?

Enemies usually don't have adjectives, but when/if they do, those are best used as a list of setbacks. A snake wouldn't have "Poisonous" but might instead give you "Sick" because that's the setback you'd get if you choose to fail at a challenge against the snake.

* Do you have an example of combat to share?

Best to just link you directly to the Example of Play for that! Specifically, look at how the player takes the initiative on spending multiple traits in Scene 3: Bandits, because every combat-type challenge is automatically considered a tough challenge.

Thanks for all of this! I found the rules on the website to be especially illuminating. There are certain differences between the website and the Definitive that we’re key to understanding. Your responses have now solidified that. The Darkness Beneath is also very helpful

Another two part question, then: 4 adjectives are assigned at character creation. When those are bid on a challenge, they are effectively lost, correct? Meaning that when a player Fishes for adjectives at a location, those are likely to be different adjectives, correct?

For example: Conan - Hyborean Warrior has an adjective “mighty” and spends it to slay Tulsa Doom. Fishing around he picks up a “radiant” sapphire. Conan no longer has “mighty” to bid in challenges?

Yes, we're hard at work on getting the rules in line across the board, but it's taking a bit longer than expected. Regardless, the website is now and will remain the most up-to-date core rules, at least.

1. Correct. When you spend an adjective to succeed, you cross it off or erase it: it's gone. When you go fishing in a scene, you pick up whatever adjective(s) the Narrator sets as available. (If the Narrator likes to improv, it could be a conversation between the player and Narrator about what adjectives are available. Either way, only the Narrator sets the refresh number, however, usually from zero to three.)

2. Indeed, the starting adjectives may be seen as "core" to who your character is, but in essence, this game says they are not: it assumes characters will fundamentally change by the session's end. Maybe not who they are, but certainly how their relationship with the world and other characters drives them.

In the core rules, only the descriptor is core to the character, though it's perfectly reasonable to create a Variation (our term for hacks, mods, or house rules) where one or two adjectives are part of that descriptor. That'd be the easiest way to ensure some adjectives don't go away, but then you have to consider if someone can double up on adjectives that are in their descriptor. Can a Gruff Detective pick up "Gruff" from Fishing, or as a setback? Seems like it'd be okay: you just spend the Gruff adjective and then it's gone, then you could spend any adjective to trigger Gruff Detective again (as long as you have at least one adjective to spend, that is!). Nothing game breaking in there, but just something to consider.

In the example of Conan, sure maybe he isn't Mighty any more, but he's now a Radiant Hyborean Warrior, which to me suggests we're taking a clear step towards Conan the King. He could always pick up a Mighty axe at some point, too. Either way, both those scenarios suggest something changed him or his situation, and that's precisely what DeScriptors is trying to highlight!

Thank you for such great questions! Don't hesitate to keep firing away as they crop up! 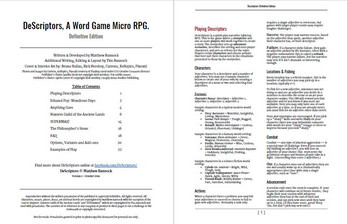 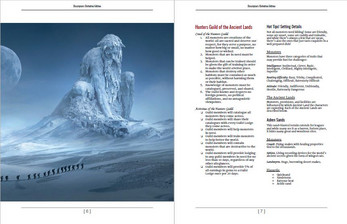 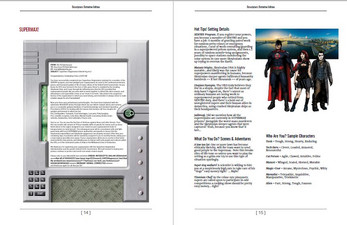 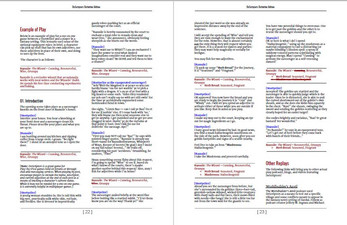